Editor’s Note: Collin LaFon, originally from Atlanta, Georgia, recently moved to Trussville, Alabama, with only one year left in high school. He knew that if his family moved just outside of Birmingham, he’d be able to train at the Lakeshore Foundation for shot put, discus and javelin – throwing events that he had competed in while attending high school in Georgia. Today Collin also participates in wheelchair basketball and wheelchair rugby at the Lakeshore Foundation. He hopes one day to throw the shot put in the Paralympic Games. Right now, Collin is number one in the world for his age group in the shot put. In the Open Division, he’s ranked 30th in the world for his age group and disability.

I was born at 26 weeks, and I weighed 1-pound, nine ounces. Because I was born so early, oxygen was cut off to my brain, which damaged my cerebral cortex, impairing my muscular system function and my nervous system function, as well as my muscle memory, my motor skills and my spatial relationship function. I have to think a lot more and much harder when I want to move. I can stand and take a few steps, but I don’t have very good balance at all. Also, I have cerebral palsy.

But all of those things are minor details because most importantly, I am an athlete.

His Athletic Career So Far

I’ve always been interested in sports, and I was fortunate enough to participate in high school wheelchair basketball when I lived in Georgia. I play in the National Wheelchair Basketball Association’s Junior Division for Lakeshore. I just played my last game in the Junior Division several weeks ago (April, 2016).

Now, I’m completing my last season in high school track and field for Hewitt-Trussville High School in Trussville, Alabama. I compete in the shot put, the discus and the javelin.

I’m often asked, “Why did you decide to compete in the throwing sports part of track and field?” I don’t really like to race, and my rugby coach in Atlanta was on the U.S. Paralympic track and field team last year. He’s a quadriplegic, and he throws the club. He thought that I’d perform well in the throwing sports, and he introduced me to a lot of the people on the U.S. Paralympic Committee.

One of the reasons I’m so excited about competing in the track and field events for Hewitt-Trussville is that the State of Alabama just started a program in conjunction with Lakeshore Rehabilitation Foundation in Birmingham to include athletes with disabilities in high school track and field. The sports that we can compete in mirror the Paralympic sports. Athletes are classified based on their functionality.

I’m happy to be one of the first wheelchair athletes to help breach the divide between able-bodied high school sports and Paralympic sports in Alabama.

If I’m the only person who competes in my age group who has my functionality, then my track team gets one point. If three people are in my class and age group, and I win, my team will get three points. If I finish last, I’ll receive one point.

My coach, Coach Dobbs, has been amazing. He supports me, and he helps me to know this is the place I’m supposed to be, and that I’m doing what I’m meant to do. I don’t know where track and field for people with disabilities would be, if it wasn’t for people like Coach Dobbs and my coaches at the Lakeshore Foundation.

In my mind, I am just like any other able-bodied athlete, however, I just have functional limitations.

I want to compete in all the sports in which able-bodied athletes compete. I’m so proud that the State of Alabama, the Lakeshore Foundation and Hewitt-Trussville High School have set-up a program, so that I can compete with my track and field team just like able-bodied athletes do. I threw in the sectional meet, and in May, 2016, I’ll go to Gulf Shores, Alabama, and compete in the state track meet.

Coach David Dobbs of Hewitt-Trussville High School has coached track and field and cross country for 27 years there. He’s been coaching track and field for 37 years over. Here’s his perspective on Collin’s progress as an athlete.

I met Collin this past summer, after receiving a phone call from our athletic director, who told me about Collin moving to Trussville from Georgia, so he could be closer to Lakeshore Foundation. Lakeshore is a training facility for athletes with disabilities and for potential Paralympians. When I met Collin, I told him what to expect from our track and field program, and what he could expect to do during the off-season of track and field. I didn’t see Collin much during the off-season, because I was coaching cross country, and Collin was working-out with our off-season coaches.

When school started, we tried to help Collin get in shape to throw at the state indoor championships. When outdoor track season started this spring of 2016, Collin began to work on throwing the javelin, the discus and the shot put.

In his first outdoor track meet, Collin threw far enough to qualify as number one in the world for his age group and disability in the shot put.

Collin had an advantage, because he had been participating in wheelchair sports since he was 10 years old. We just worked with him on his techniques and the skills required to throw farther. He also worked out with our other throwers in the field events. He worked out in the weight room and did push-ups just like they did. Collin fell into place and did what everyone else on the team did.

The rest of the members of the team have gotten involved with Collin. They’ll bring his throwing chair out to practice. Because he is strapped into his chair, he can’t retrieve the shot put after he throws it. Some of his teammates retrieve the shot put, the discus and the javelin for him.

Coach Dobbs Gets an Education

Collin is an unbelievable member of the team. He horses around with the team and cuts up with them. He’s just one of the guys. He flirts with the girls, and the girls flirt with him. He’s an average 18-year-old who just happens to roll. We are all excited to see him train and possibly go to the Paralympics in 2020.

Since Collin came to school, I’ve been on a steep learning curve.

One of the really great aspects of Collin being a part of our track team is that the coaches who host track meets have been so helpful in making accommodations for Collin. All the officials know him. He may be one of the most well-known athletes at Hewitt-Trussville High School. All the officials know when he’s going to throw, and   they know how to measure his throws. They’ll send me an email before track meets asking if Collin is coming that week.

Because of Collin’s influence, I understand that we’ve also had three or four of our state track officials become Paralympic officials.

We really appreciate the Lakeshore Foundation for encouraging the state to move forward with this new program. Now, these kids can go to high school and be a part of the entire high school experience, including the sports programs. I’m convinced this program is great for young people with disabilities. However, I think the greater benefit here is that all the other students have the opportunity to get to know someone like Collin.

They get to be around him, to have him as a team member, and to see that Collin is just like everybody else, especially on the athletic team.

The only difference in Collin and his teammates is that he can’t stand up by himself. When Collin got a scholarship to the University of Illinois, he was part of the signing ceremony with all of our scholarship athletes.

I received an academic scholarship from the University of Illinois’s AHS (Applied Health Sciences) James Scholar Program. The University of Illinois has about five different colleges, and each one of those colleges has a James Scholar Program. This program awards scholarships to the top 10 percent of incoming freshmen students in each college, and I received one of those scholarships. I’ll be participating in this honors program, as well as the school’s athletic program. 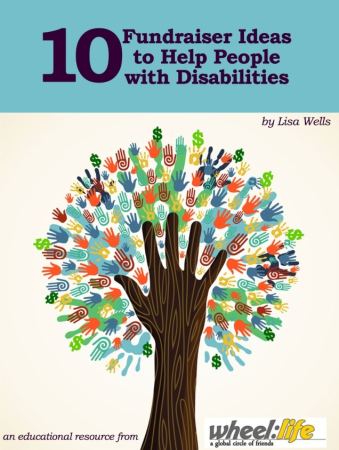 In this book, you’ll review 10 brainstorming ideas for different types of fundraiser events to benefit an individual with a disability who needs assistance for medical equipment, physical rehabilitation, adaptive sports equipment or daily medical needs.

Throughout the book, author Lisa Wells shares real-life examples and success stories from her interactions with disability advocates, non-profit supporters and Wheel:Life members throughout a healthcare marketing career that spans more than 20 years on three continents.

10 Fundraising Ideas to Help People with Disabilities features interviews from:
• Paralympian Bert Burns on how he raised support to begin his career in wheelchair racing
• Project Walk Atlanta participant Leslie Ostrander on how she raised money for additional rehab
• The founders of 100 Songs for Kids on their annual music event to benefit children’s medical charities
• Rolling Inspiration creator Chris Salas on how he lined up sponsors for his SCI peer support group
and power soccer team
• The creators of Hunter’s Torch Daylily Garden, a fundraising resource for a child with special needs.
• The Independence Fund – a little known source of financial support for disabled US veterans.

About the Author: John E. Phillips

For the last 12 years, John E. Phillips of Vestavia, Alabama, has been a professional blogger for major companies, corporations and tourism associations throughout the nation. During his 24 years as Outdoor Editor for “The Birmingham Post-Herald” newspaper, he published more than 7,000 newspaper columns and sold more than 100,000 of his photos to newspapers, magazines and internet sites.